Origins of the Mission 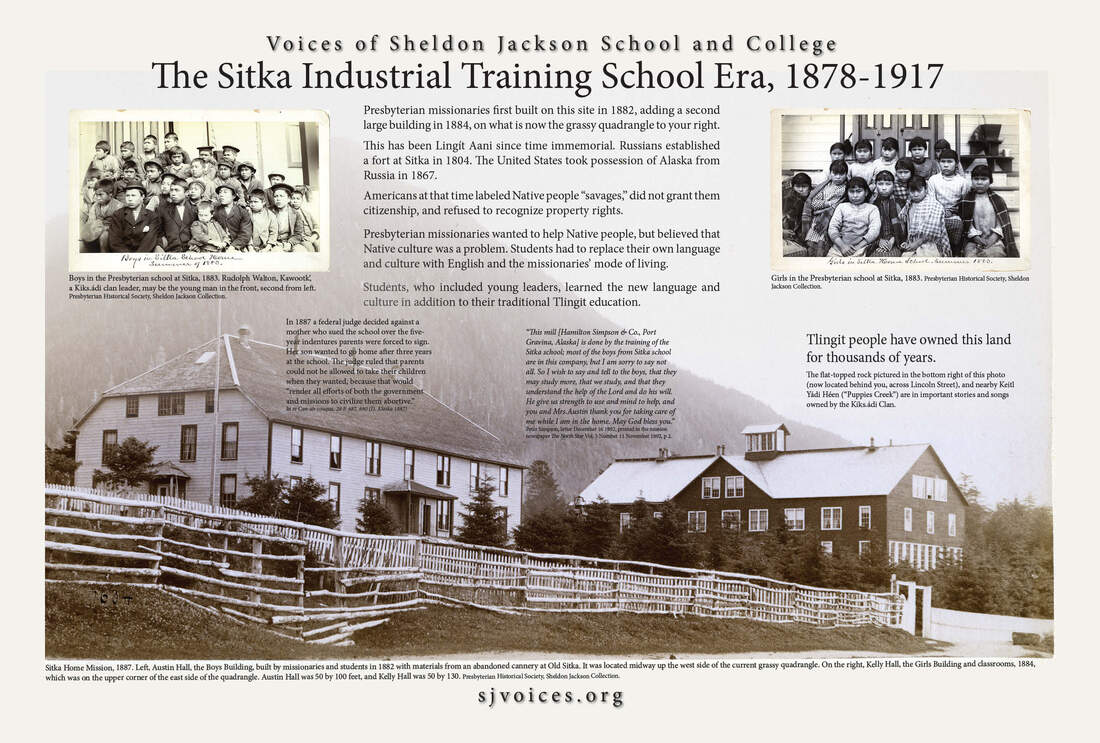 By Rebecca Poulson
Founded in 1878, Sitka’s Sheldon Jackson College was the oldest institution of higher learning in Alaska when it closed abruptly in 2007. The windows were boarded up, and the already neglected buildings remained unheated and empty as the college board of trustees struggled to address a massive debt. Then, in 2011, much of the core campus was turned over to Alaska Arts Southeast and its Fine Arts Camp, who are restoring the physical campus, and filling it with arts and cultural education programs. Along with the physical campus, the Fine Arts Camp soon found they had inherited a deep and complicated history. In addition to the strife surrounding its closure, Sheldon Jackson has a legacy as a Presbyterian mission school of repressing Native language and culture. In spite of this purpose, many staff and graduates of the high school and the college have strong affection for this place. The relationships of graduates to the school and the impact of the school on the lives of both students and staff add to our understanding of Alaska Native experiences in the 20th century.

This chronology is a start at shedding light on some of the apparent contrasts and contradictions in the school’s history. The early history of the school is especially relevant because Alaska today is the product of the the power struggles of this crucial era, and the legacy of Sheldon Jackson and his mission.
I’ve tried to footnote information that’s not widely documented.

A Chronology of Sheldon Jackson School and College: Origins

The Kiks.ádi clan of the Lingit people are the traditional owners of the land that became the Sheldon Jackson campus.1 The Lingit people held what is now Southeastern Alaska since time immemorial; the history of this school is a small fraction of the centuries of Lingit life in this place.

At the time the first Europeans came to the North West Coast in the 1770s, there was a major winter village at the foot of Castle Hill (Noow Tlein) (roughly the Sitka Hotel area), with some clan houses atop the hill. There was also a village from the mouth of Indian River to Jamestown Bay.2 There were probably structures here on the campus.

There is an ancient Kiks.ádi story about the unusual, flat-topped rock at one corner of the campus. This story is where Dog Creek (Keitlyátx'i Héeni, Puppies Creek, in Tlingit) gets its name.3

1700s
Russians worked their way into Alaska east from Siberia beginning in the 1740s, using forced labor by the Indigenous people of the Aleutians and Kodiak Island and the mainland of that region to kill sea otter for their valuable skins, devastating societies and decimating villages, and wiping out sea otters, as they came east.They established forts in Prince William Sound and on Kodiak Island.
After the 1780s, other nations joined in the maritime fur rush. Rather than using forced labor, this trade was by captains who traded with the Indigenous traders on the North West coast for sea otter furs. In the 1790s, Sitka became the central battleground in the fur trade. British and American ships traded with the Tlingit and other North West Coast traders, while the Russians, having destroyed sea otter populations in the Gulf of Alaska, considered Southeastern Alaska to belong to them.
In 1799 Alexander Baranov, the chief of the Russian American Company, negotiated with the Kiks.ádi leaders to allow him to build a fort at Old Sitka. In 1802, a multi-clan alliance of Tlingit destroyed the fort. Kiks.ádi tradition tells that it was an accumulation of insults that led to the fort's destruction. Economic conflict - that the Russians were taking sea otter from Tlingit waters - was likely also a factor.